The Humanity of a Wall

Building a wall on our southern border and putting forth efforts to actually enforce control of our borders is the right thing to do.

No, I’m not having the conversation where I make a case for the pragmatism of building a wall. I’m not arguing that border security is of utmost importance to the safety of this nation. Both of those arguments are settled. We know that gangs, criminals and even terrorist groups are already crossing our border illegally. If we want to stand a chance of preserving our way of life, we will need border control.

That conversation is over.

Anyone who thinks otherwise probably has no door on their home, no locks on their cars, no fences around their schools and certainly, no private bedroom or bathroom. They likely protest the White House for having security guards and I know that they share their wifi password with the whole neighborhood. Seriously, anyone who still doubts that America NEEDS to protect its border, is totally willing to share their home with anyone who walks in the open front door. Free chips, BYOB.

No, this conversation is about ethics. What should America do?

While many will proclaim that America has a duty to bring in the world’s ‘tired and huddled masses’ (which is an opinion that I personally hold), many of these same folks will choose to ignore the oppression happening right under Lady Liberty’s nose. The brutality and extortion happening on our doorsteps is blatantly ignored, while those who want to end such violence are immediately labelled racist, bigots and xenophobes, even if they are minorities belonging the very group that is supposed to be offended.

Just as many modern “Progressives” will use racial slurs on a black conservative for taking part in ‘racism’ (let that one sink in a bit), today’s liberals will get viciously angry at a ‘Mexican’ for not feeling sufficiently offended at the thought of an America with actual borders.

Today’s epidemic of extortion has less to do with the American homeland at risk, and has everything to do with those who do cross the border illegally. As in, illegal immigrants, alien migrants, undocumented workers, or whatever label you assign to them. These are human beings who are subject inhumane treatment that results from a national disinterest in enforcing our border laws.

Allow me to bestow upon you a sad truth…our southern border is not controlled by us.

Sadly, our border is controlled by corrupt law enforcement officials (on both sides). More accurately, it is controlled by gangs and cartels.This means that the guys bringing people across are not border patrol agents, not friends, not even Vin Diesel and the great Paul Walker (May peace be upon him). No, people are smuggled here by “coyotes” (read: human traffickers) in cahoots with cartels. You know, guys like this…. 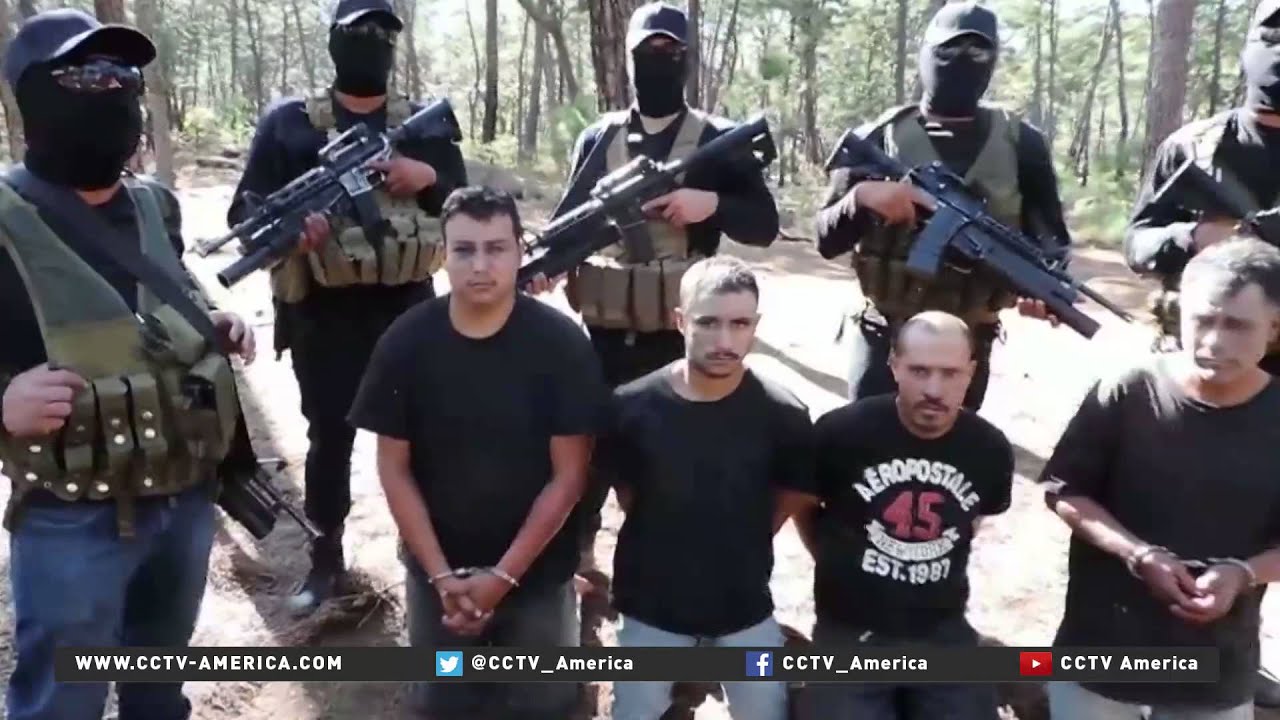 No, that’s not ISIS. Those are members of the Sinaloa, Jalisco and Zetas cartels. They are well armed, well trained and absolutely vicious. To give some perspective, cartels are responsible for more beheadings than ISIS or Al Queda, they kill significantly more people per year, target women and children and use absolutely brutal tactics to illicit fear in their enemies. Worst of all, they are not just on our doorstep, they are here.

According to a DEA report called the Areas of Influence of Major Mexican Transnational Criminal Organizations, cartels have strongholds in every US state (even Hawaii and Alasaka), with borderlands under continual turf wars between the cartels.

Cartels have infiltrated EVERY state in the US

These brutal cartels use our border as leverage over illegal immigrants. People who are not legally in the system are subject to exploitation. Massive corporations do this with frequency and those being abused can’t speak out. This, of course, is on top of the abuse and downright oppression than many immigrants face in Mexico.  But of greater significance is the absolute inhumanity that occurs to millions while crossing our border.

Undocumented immigrants pay upwards of 5-10 grand (which is a TON of money to someone from a 3rd world country) to be smuggled across our borders through tunnels, rivers and barren deserts. Many are tasked with carrying drugs in 40 lb. blocks on their backs along the way. Others are used in ways far more vicious.

Cartels are not solely focused on the drug trade. In fact, they sport a diverse portfolio of horror that includes kidnapping and extortion (more on that below) as well as sex trafficking. Young children, women and even men are sold into sex slavery, this subjugation continues after they arrive on our soil.

Of particular relevance are children who were rushed to our borders following President Obama’s DREAM Act. CNN called a this surge a ‘refugee crisis of epic proportions.’ With this new legislation, families sent their children, alone, to be accompanied by the aforementioned cartels in hopes that they arrive here for a better life. Many are instead exploited by said cartels and those who arrive here are often diseased, malnourished and unhealthy. What’s worse is this legislation shields gang and cartel members from being screened. None of this is to say that we should turn away these children, quite the opposite, what’s needed is control of our border so that these children can be accompanied by gentle American agents instead of bloodthirsty murderers.

The sad truth is that any invitation on our part to open borders becomes a new revenue source for some of the world’s worst people. 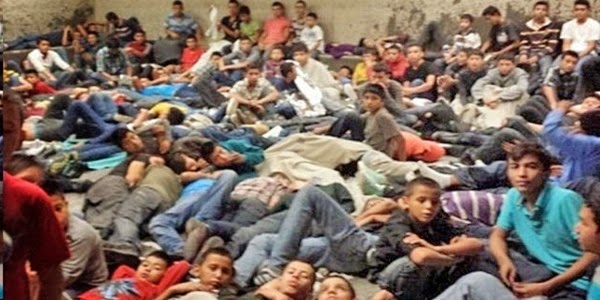 Hundreds of Latino children at a US border crossing

Oh, and by the way, ending the drug war won’t solve this problem. Turns out that cartels are familiar with great investment adage “diversify, diversify, diversify.” It seems that extortion is pretty good business, even when drugs aren’t involved. Not only that, but ending the drug war does nothing to address the child extortion and sex slavery resulting from illegal immigration.

Criminal cartel empires have surpassed the drug trade, and while illegal drugs still make up a significant portion of their activity, it is no longer their primary action. After years of using kidnapping as a way to gain leverage over Mexican government officials, the cartels realized that kidnapping is big business. Kidnapping is on the rise in Mexico, causing more damage to the community than the drug trade.

In fact, extortion is so successful, that cartels have a new kidnapping/extortion app. Seriously.

Rather than solely target the families of government officials or law enforcement, cartels now kidnap pretty much anyone. They will take someone, use their social media accounts to demand a modest ransom and release them within days or even hours. It’s literally express kidnapping, and it’s no longer a strictly Mexican phenomenon as cartels have begun such actions  in the US.

The gist is this, without a real interest on the part of Americans to control our own border, these immigrants will continue to suffer. Without such control, gangs, cartels, and even terrorists will continue to cross into our country, leaving a trail of destruction behind them.

By taking a stand and defining a border with walls and drones and agents and stormtroopers and whatever else we need to effectively monitor our border, we will help America, Mexico and frankly, the whole world.

Sadly, the modern Democrat apparently cares nothing for the victims of these people, as they have shown that they have no interest in ending the cartel control of our border.

Building a wall keeps America safe (duh) but it also will save millions and millions of illegal immigrants. Human beings who, I might add, are for the most part “People of Color” (I say this just to make sure liberals understand who they are hurting, as well as grant them permission to be defended as members of the protected class).

So there it is folks, will you help these people, or are you just a racist, xenophobic, sexist bigot who only cares about yourself?

Steve is just a normal guy who loves to play. If he had been born in another time, he would have been an explorer. Steve loves playing outside and spends time with his awesome wife, Miriam, and his children, Elijah, Andrew, Abby and Emma. He works at Black Diamond Services, a service company in Utah and studies at the University of Utah.
View all posts by stevejames1012 →
This entry was posted in Uncategorized. Bookmark the permalink.